Independent lab AV-Comparatives focuses on one thing and one thing only — constant, regular tests of the leading antivirus software on the market. After putting each brand’s software suite through its paces, the lab then publishes the results in easy-to-read reports aimed at helping consumers make informed decisions in choosing the cybersecurity that’s right for them. This week, AV-Comparatives published result reports from three studies, and Avast software was tested in each of them.

For this test, the lab launched 11,890 recent malware samples on a Windows 10 system protected by Avast Free Antivirus. The malware was activated either through a USB connection or on the network drive itself. Triumphantly, Avast blocked all 11,890 malicious samples, scoring a perfect 100% protection rate and earning it AV-Comp’s highest award of Advanced+. 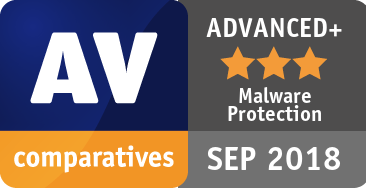 The test is designed to check both protection AND detection capability. As the report states:

In some cases, an antivirus program may not recognize a malware sample when it is inactive, but will recognize it when it is running. Additionally, a number of AV products use behavioral detection to look for, and block, attempts by a program to carry out system changes typical of malware.

Our AI-based AV software does indeed monitor for behavioral changes within your system, staying alert for any malware that may be lying dormant until activated.

Another important aspect of this study is the accompanying False Alarm Test, which checks the AV software’s ability to differentiate safe files from malicious ones. AV-Comparatives makes a point during malware tests to also monitor the AV software’s reaction to common, safe programs. Out of the 18 software suites tested, Avast scored in the top 3 for fewest false positives. Microsoft’s own default security Windows Defender flagged 32 false positives, while Avast flagged only 5. And while many of the other brands tested were paid services, Avast Free Antivirus is absolutely free.

Our Real-World Protection Test is currently the most comprehensive and complex test available, using a large number of test cases.

Part of a larger series, like the Real-World Test above, this test and the one listed below are portions of the Business Main-Test Series, a study that focuses on AV software for business use. AV-Comparatives will publish the full results of the series this December. This Aug-Sep Malware portion involved 1,556 recent malware samples, all launched at a Windows system protected by Avast Business Antivirus Pro Plus. Our software detected and blocked all 1,556 samples, and earned 100% protection rating with zero false positives.

Part of the same series as the above test, this one also tested Avast Business Antivirus Pro Plus by directing it online to 599 malicious URLs. Avast blocked 596, earning a score of 99.5% protection rate with zero false positives. For everything your business needs in one cybersecurity package, check out Avast Business Antivirus Pro Plus and enjoy ultimate security for your business.

Avast app earns top marks, 138 others called out as deceptive

Avast got a perfect score from independent AV-Comparatives, but these other security apps could do more harm than good.

Avast Wins Product of the Year