Cryptocurrency mining malware, which also installs a malicious Chrome extension, hosted on GitHub for anyone to download.

Cybercriminals are aggressively uploading cryptocurrency mining malware to GitHub. The cybercriminals fork other projects, which on Github means producing a copy of someone else’s project, to build upon the project or to use as a starting point and subsequently push a new commit with the malware to the project. The projects which have been forked appear to be chosen at random. A list of affected GitHub repositories can be found at the bottom of this blog post.

The cybercriminals behind the malware are hiding malicious executables in the directory structure of the forked projects. People are tricked into downloading the malware through phishing ads shown on online gaming and adult websites, warning users that their Flash Player is outdated, for example, as well as through a fake adult content gaming site. In addition to mining, the malware also installs a malicious Chrome extension, to inject fake ads and to click on ads in the background, allowing the greedy cybercriminals can make even more profit. 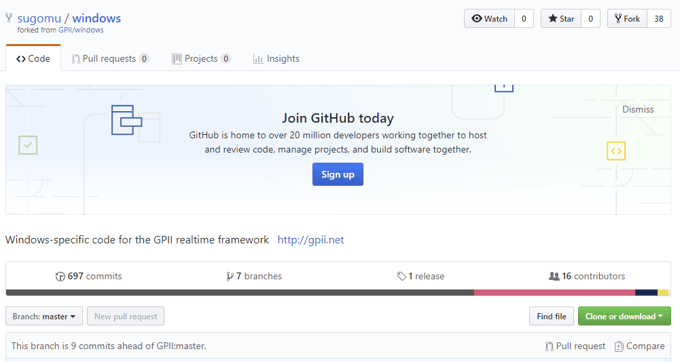 Users don’t need to download the malicious executables directly from GitHub. Instead, the malware is spread via a phishing ad campaign. When a user visits a site that displays the phishing ads and clicks on an ad, the executable downloads.

The ads first lead to an attacker-controlled server (http://binqg.xyz/direct.php?sub3=25-114-201802141754224cef0ad22&f=setup_sex_game.exe), which then redirects to the GitHub repository hosting the malware, which is where the malicious executable is loaded from.

In addition to the phishing ad campaign, we found an adult content site spreading the malware by offering site visitors a sex game.

In this animation you can see how the webpage serves the malicious file right after the page is visited. If the user clicks through the page, it offers the same file again, after the user clicks on 'I'M OVER 18 YEARS OLD - LET'S PLAY - DOWNLOAD'.

A closer look at the actual malware

The malware incorporates a Monero miner that is also hosted on GitHub The cybercriminals added malicious functionalities to the miner. One of the functionalities includes terminating Opera, Chrome, and Amigo Free Browser processes. We aren’t sure why Opera and Amigo Free Browser processes are terminated, as the malware targets Chrome users. We suspect this is a bug or maybe the cybercriminals are planning on launching a version of the malware that will also target these browsers.

The first thing the malware does is copy itself to “C:\ProgramData\VsTelemetry\vshub.exe”.

Newer samples of the malware use this path: “C:\ProgramData\WindowsPerformanceRecorder\spyxx_amd64.exe”

Next, it schedules two tasks:

The first task installs a Chrome extension that injects JavaScript into every opened page. The task also loads the malware on a daily basis, every midnight and is set to never end and is set to repeat itself every 10 minutes, unless the process is already running. Even if the infected computer is rebooted, the malware reloads. If the process is terminated by the user, the task schedules it to restart 10 minutes after.

The second task has the process restart two minutes after the process has been terminated.

The second task mines with the following options:

The options above are explained on this GitHub page:

A number of things are done in order to avoid user detection. The “max-cpu-usage” is set so that the malware can use a maximum of 50% of the infected computer’s CPU, so the computer doesn’t run too slow. Next the “cpu-priority” gives other processes that need higher amounts of CPU priority over the malware. This allows the victim to use their computer as usual, so the malware can go unnoticed. Another common trick used by mining malware that is also used by this malware, is that once the task manager is activated, the malware stops mining to avoid being caught.

Above is an animation we created to show the redirect process, which in reality is 10 times faster (we slowed it down when creating the animation), that essentially prevents users from removing the malicious extension.

The last extension file includes a malicious script, contentscript.js, which is loaded by Chrome thinking that it is loading the AdBlock extension.

In the unobfuscated version of contentscript.js above, we can see that the malware is targeting Google and Yahoo searches.

What’s interesting is that Google Chrome loads this plugin without any problems, on the other hand, when someone wants to load a custom Chrome extension, they have to enable the so called “Developer mode” in order to run the extension.

Once the malicious script runs, it’s business as usual:

The malicious script from the extension injects ads into victims’ Google and Yahoo search results, to make money from clicks.

The search terms entered by victims on Google and Yahoo are leaked to a non-Google and non-Yahoo website. This is most likely done to better target them with ads.

Stathat.com and yandex.ru pages are visited by the browser in the background. The pages can include ads, which means the cybercriminals could also be receiving revenue shares from the clicks.

The malicious extension can be removed by uninstalling Chrome and deleting user data when uninstalling. 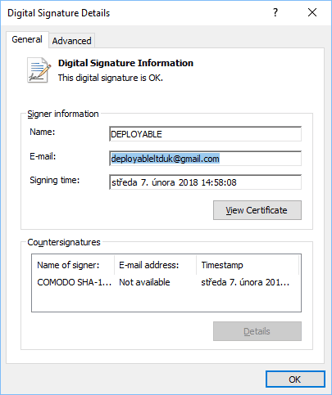 By signing the executables, the cybercriminals actually made our job of detecting this malware as malicious much easier, which was probably not what they were trying to achieve. Our machines automatically mark all files with the certificates in the screenshot above, as malware.

Russian speakers likely behind the malware

The authors behind the malware probably speak Russian, or expect their victims to be Russian speaking

The first clue that suggests the authors are targeting the Russian market or are Russian, is that the function “SetThreadLocale” is called with the Locale argument set to 1049, which is the code for the Russian locale.

The function SetThreadLocale is called with the Locale argument set to 1049 which stands for the Russian locale.

The second clue that makes us think the cybercriminals behind this malware are either Russian or targeting Russians, is that the malware checks the following path when it tries to inject a browser extension: “\Хром\User Data\Default\”. “Хром” stands for “Chrome” in Russian. The code set to the Russian locale lets Windows know the text encoding used by the program, allowing the program to properly decode bytes D5 F0 EE EC into “Хром”.

Another clue was found in the the git commit log where all commits were done in the UTC+03:00 timezone (Moscow Time), which can be seen in the screenshot below

Benefits to hosting malware on Github

Hosting malware on GitHub is unusual, but we have to admit, we see some of its benefits. The malware is hosted for free, on a reliable platform with unlimited bandwidth. The version history is available for malware researchers, like us, to view and on top of that, we can see the malware in real-time. Thank you very much!

An update on GitHub, showing that three files had changed

Updates made to the malware on GitHub

The cybercriminals behind this campaign cleverly shortened the links visited by the malware, using Bitly:

Yay, free stats for everyone!

From our backend systems, we can see how many Avast users we protected from downloading the malware:

The malware is still live and being hosted on GitHub. GitHub has removed many forked projects hosting the malware, but the cybercriminals are very determined and continuously upload the malware on GitHub again and again. We are working together with GitHub, supplying them with new repositories containing the malware, which GitHub is removing.

As for the malicious Chrome extension, we have reached out to Google, notifying them of the extension. At the time of publishing this post, the extension has not been blocked by Google. Users infected can uninstall Chrome, selecting “delete browser data” in order to remove malicious extension.

We aren’t sure how much the cybercriminals behind this campaign have earned through the malicious extension and the mining malware. We tried looking up their Monero account balance, but sadly, Monero said “no!”:

Avast detects and protects its users from this malware.

How to protect yourself from malware

How SMBs can keep data and devices protected - no matter where work is being done.

How organizations can become more cyber resilient, and how they can fix blind spots in their cybersecurity strategy.