Avast Blog Give the gift of privacy: Avast SecureLine VPN

We’ve added more countries and more servers, just in time for the holidays.

At a time when almost every holiday present is an IoT device—connected gadgets that can put your privacy and safety at risk—why not think one better, and gift your loved ones with online privacy instead? VPNs (virtual private networks) are secure lines to the internet. They protect users by masking their real IP address and encrypting their data.

With increasingly smart advertising methods that target individual users, the current sophistication of cybercrime, and our recent loss of net neutrality, privacy is becoming less a right and more a luxury. VPNs provide that luxury. They allow you to do everything online you’ve always done, only now in a safe tunnel of privacy. Instead of driving around the cyber highways with the top down and everyone seeing both your identity and your actions, VPNs are your rental car with tinted windows. Nobody knows who you are or where you came from.

We just gave our own Avast SecureLine VPN a tremendous boost, adding 12 new countries to the areas we service and 11 new server locations in existing countries. The closer the VPN user lives to one of our servers, the faster and better their browsing experience will be. Our new servers are stationed in the following locations:

And the new countries we are welcoming to the VPN private highway are:

This brings our total number of servers to 52 locations, spread through 33 countries. Chances are, you’ve got at least one in your region. For a full list of our server locations, check out our world map. 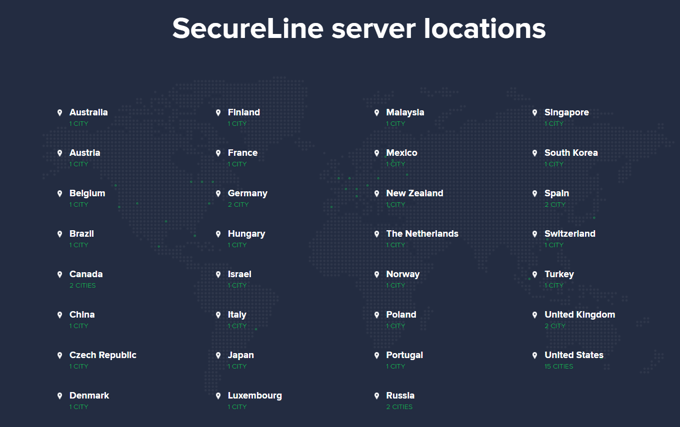 Protect your family’s privacy. Give the stocking stuffer that keeps them anonymous online and safe from spying hackers. Try Avast SecureLine VPN for free to ensure that nobody’s watching your family from afar (except for Santa).