1 in 3 small businesses is clueless about ransomware

We surveyed businesses to understand who had heard of the term ‘ransomware’. Find out what they understood about it.

Ransomware is one of the world’s fastest growing malware categories. In June, we surveyed businesses to understand who had heard of the term ‘ransomware’ and what they understood about it. 381 of our small-to-medium business (SMB) customers in the US and UK responded to our questions and the results proved revealing and concerning.

68% of respondents said they had heard of the term ‘ransomware.’ 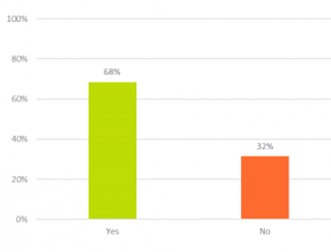 That may look like a good percentage, but this also indicates that even with security industry, media and governments working hard to educate businesses about the risks, nearly 1 in 3 is still not aware of this significant risk.

So, what is ransomware and how does it impact businesses?

Ransomware is a generic term for a category of malware that restricts access to a device or the file(s) on a device until a ransom is paid. It’s a method for criminals to make money by infecting the device and has become very effective at causing havoc for a business or organization that is unfortunate enough to become a victim.

It’s not new, which is why the 32% concerns me. The first cases were reported as far back as 2005, which took the form of fake antivirus software claiming you had issues that required payment in order to be fixed.

Over time, ransomware morphed into scareware messages. Scareware messages, designed to trick users into downloading malicious software and often disguised as communications from law enforcement, typically claim that a device has been infected or that the usage history of a device shows illegal activity—or in some cases blatantly locking files until you call and pay the ransom.

The 68% of respondents claiming to know what ransomware is had very different opinions, many of them inaccurate. When asked to explain the term, it turns out that 36% (of the 68%) didn’t actually know what it was.

Since 2013 when Cryptolocker ransomware first surfaced, ransomware has now become a major security issue with organizations being held to ransom - and in some cases paying to get their data unlocked. Numerous incidents have been cited where thousands of dollars have been paid: hospitals, charities, hairdressers have all been held to ransom. One university has suffered 21 attacks in the last year alone!

The true scale of the problem is somewhat hard to define though because, understandably, many businesses and organisations are reluctant to reveal they’ve been held to ransom because of fears about being targeted again, or losing existing or new customers.

People are held to ransom in just a few seconds

Unsuspecting victims are infected through emails impersonating customer support personnel from well-known company brands. Once activated, the malware encrypts files and demands payment, typically a few hundred dollars within a timeframe of 48 or 72 hours.

Last year alone, the FBI received 2,453 complaints about ransomware hold-ups last year, costing the victims more than $24 million dollars! Earlier this year, the UK National Crime Agency claimed ransomware attacks have increased in frequency and complexity, and now include public threats by the perpetrators to publish victim data online, as well as the permanent encryption of valuable data.

4 ways to protect your computers and networks against ransomware

Taking proactive steps to protect your organization from a ransomware attack is essential to the smooth running of your business—it is your livelihood, after all. Contingency and remediation planning are also crucial to business recovery and continuity, and these plans should be tested regularly.

Businesses get a new layer of protection with Avast Ransomware Shield

In light of evolving threats, businesses can rely on Avast’s Ransomware Shield for uninterrupted access to their systems and data.