Yes, Macs are susceptible to ransomware, too

By now we’ve demystified the myth that Macs are impervious to harm. The cybercrime world has caught up to the technology, and no computer — PC nor Mac — is safe. We have recently discussed some growing Mac concerns, like the rise in adware attacks and a full system slowdown caused by too much clutter, but now we need to talk about something even more malicious: Ransomware.

Ransomware may be the most nefarious of malware strains. It encrypts your own files on your own computer and demands money to unlock them. The ransom can range anywhere from hundreds to thousands of dollars, and there's no guarantee that you'll get your files back after you pay. While removing the ransomware from your Mac may prevent further encryptions, it won't decrypt any data that's already been encrypted.

Ransomware attacks are happening all the time. Here are some of 2017’s most infamous ransomware Mac attacks:

This strain was distributed through infected copies of Transmission, a popular BitTorrent app for Mac. Unbeknownst to the developer, Transmission’s own site linked to the infected software.

Another BitTorrent distribution, this virus posed as cracks for Adobe Premiere CC and Microsoft Office 2016. (Cracks are essentially bootleg copies of the software.) Instead of doing what it promised, however, Patcher served as a Trojan horse, letting in ransomware to lock up the user’s files and demand a ransom.

Protons are Trojans that pose as legitimate programs. Once launched, the virus opens a “backdoor” that lets in the attacker, who then has access to your browser info, usernames, passwords, payment details, macOS keychain data, and more. Earlier this year, popular transcoding software Handbrake was infected with a proton that launched ransomware attacks on unsuspecting users for five days before the developer became aware of the problem.

Proton-infected Elmedia Player
Just last month another proton attack used the Elmedia Player for Mac as its host. Once users were tricked into running it, the proton backdoor activated, and ransomware crept it.

And very recently -  in September - unknown cyber criminals gained access to Mac users’ iCloud account information and used that information to lock them out of their systems, demanding payment in bitcoin in order to regain access to their Mac.

There’s no arguing that ransomware attacks are a nightmare, but here’s the good news—you can protect yourself. Our protection powerhouse Avast Security Pro is now available for the Mac, and it defends against all kinds of attacks, but especially that hateful heavy-hitter ransomware. 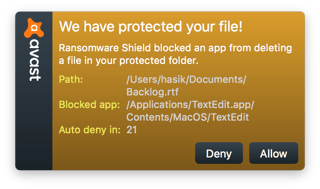 You can try our always-free version of Mac Free Security, or upgrade to Security Pro for $39.99. Protect yourself today.

Update now to 14.2 to protect your iOS and iPadOS devices from new, previously unknown vulnerabilities.

The tide has turned and Mac users are waking up to the fact that they need protection for their beloved laptops and desktop computers.

Your creativity secured: How Mac users can protect their masterpieces

Find out how Mac users can protect their creative works in a world of increased threats.