Trump, Putin, and the dangers of fake news

Originally published at The Parallax.

The past year was a somber one for democracies around the world, as distaste for political institutions and political elites reached a breaking point. Brexit triumphed over common sense, and united defense, in England. Extreme right-wing politicians continued their march to power in continental Europe. And the U.S. Electoral College victory of Donald Trump secured the election of a populist demagogue who openly criticizes the democratic system. 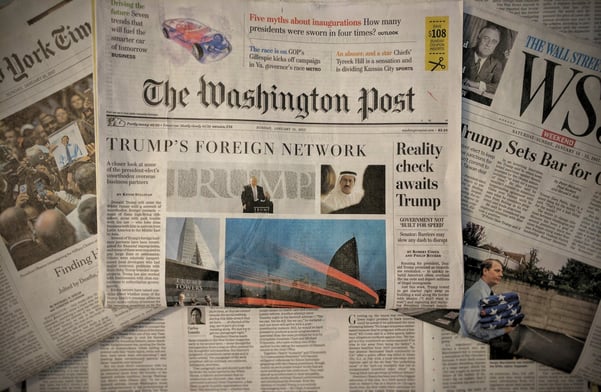 As we approach his inauguration, Trump is leading a public dispute over whether to believe WikiLeaks Editor-in-Chief Julian Assange and Russian propaganda instead of the combined voices of U.S. and foreign intelligence agencies, elected officials, and the mainstream media across the ideological spectrum.

Although the exact scope and impact of its report is still under scrutiny, the Office of the Director of National Intelligence stated earlier this month that Russian operatives hacked and manipulated the U.S. presidential election of the United States, the historic bastion of republican democracy. Amid the reports of these more concrete attacks, it is easy to overlook the seriousness of another assault on a democracy’s ability to represent the people: that of disinformation.

Information “starvation” under closed regimes robs the public of its ability to make informed decisions, but the other extreme—a flood of disinformation—also has very harmful effects.

The costs of disseminating information have dropped in the Internet age. So, too, has the cost of election interference. Trump’s election confirmed that the power of the Internet to disseminate information at low costs and with even lower accountability can play a transformative role in strengthening or undermining the democratic process.

The pace of information generation has grown far faster than our ability to process it. Traditional sources like newspapers and cable news are rivaled by blogs and social media, where individuals can reach millions of people in seconds. And as volume risks drowning out quality, weapons such as “fake news” are becoming more powerful by the day.

Computer hacks and propaganda are nothing new to international relations, but that doesn’t make interference acceptable. Beyond pushing agendas, propaganda is being used to distract, confuse, and generally weaken people’s ability to perform the necessary duties of citizens in a democracy. As misinformation proliferates, people are less likely to trust anything they read.

Instead of asking whether disinformation will persist—because it will, as long as it is deemed effective—we must ask how we will defend ourselves against it.

Information “overload” has led people to resort to their own methods of media filtering. Some people simply shut it all out, essentially starving themselves of important information and thus becoming easily manipulated voters. Others, struggling to verify the validity of the news they read, might pay attention only to the source, in an effort to conserve mental resources and avoid drowning in a sea of information.

While the development of personal networks of trusted sources is useful, it can result in the prioritization of tribes over democracy, with instinct playing the deciding role in which facts to believe and which to dismiss.

This is, indeed, a central paradox of the Internet age: Easy access to a great deal of information does not necessarily translate to greater openness and transparency. It can, in fact, become easier to hide the truth.

At this point, for example, most people don’t differentiate accurately between the lost emails on Hillary Clinton’s private server and the DNC emails stolen by Russia and distributed by WikiLeaks. And after skimming so many related stories for so long, can anyone accurately describe Trump’s real relationship with the Russian oligarchy?

When we are forced by overload to substitute information and facts with impressions and feelings, we become much easier to manipulate.

Vladimir Putin has long understood how to tap into human psychology and use disinformation to advance his goals. The vast troll factories and covert FSB operations he oversees aim, first and foremost, to overwhelm media consumers. Once people are thoroughly frustrated and distrustful of all sources, it becomes easier to prey on their basic human impulses, such as invoking nationalism, fear of the other, or glorification of the past.

The goal of disinformation is not only to provide wrong information or to promote a specific agenda. It is to devalue the entire concept of truth, and to instill a state of perpetual doubt and confusion.

We cannot quantify the impact of Putin’s techniques on the vote, but we can say with certainty that his meddling helped expand the existing divides in American society into more hostile identity groups. Driven by fear and uncertainty, many Americans retreated into the familiar corners of religion, race, party, and class rather than embracing shared ideals.

I do not advocate for government or media unchallenged by the people, but I do believe that a balance, and a degree of good faith in institutions that deserve it, must be maintained. In democracy, there must be a place for truth—a space that allows for dialogue, understanding, and cooperation—and sincere bipartisan efforts to reveal that truth.

Unfortunately, no effective presidential candidate emerged to push Americans toward unity; instead, the United States now has a president-elect who is all too willing to fan the flames of division to advance his personal success. I hope that the United States can make a collective resolution to revive the values of openness, integrity, and collaboration that keep democracy strong.

Trump won the election; there is no turning back on that. The key will be to constantly remind him and his supporters that he was elected president of a democratic republic, not anointed emperor, and that the rule of law is why the United States has survived and thrived for so long.

Along with many other countries, the United States is witnessing a resurgence of forces that call for a return to the dark past, with sectarian beliefs and regional powers triumphing over universal values. The battle between modernity and archaism is nothing new, but it is now playing out in cyberspace, and those who reject progress have equal access to the fruits of technology.

To combat chaos and the steady undermining of our institutions, we must remember that the foundation of democracy—that people must have a voice in their governance—must remain beyond question.

While free discussion is a key component of liberty, we must also be alert to the threats of hostile propaganda, news overload, and weaponized information. We cannot rely on public or private institutions to rescue us, unless we also act to rescue ourselves by becoming informed, active end users of information and technology. We must inform ourselves, and we must remain critical of our sources, even when we agree with their conclusions.

Many proposed actions would, in practice, turn out to be more dangerous than the disease they aim to cure. Infringing on the freedom of speech is more harmful than disseminating fake news, so be careful about which pills you ingest. Censorship is seldom announced as censorship, and nearly every law that restricts the freedoms of citizens is first proposed as a way to protect them.

Government agencies should be limited to enforcing a fair playing field and protecting citizens from exploitation and fraud. They should attempt to create a level of transparency that empowers people to make informed decisions, just as regulated food labels detailing ingredients and nutritional data are intended to do.

Making facts available isn’t enough. Entertaining narratives that confirm our biases can be irresistible, especially if they come from people we support. Conspiracy theories and anti-establishment contrarianism are always popular, especially with people who, like Trump, are eager to portray themselves as outsiders.

Perhaps we can start with a blueprint for how the media ought to behave in an era when simply reporting both sides of a story does not make for objective journalism. Along with what, how often, and how loudly people say things, we need a greater focus on whether what they are saying is true. We can’t simply block propaganda without harming free speech, and we can never stop people from believing what they want to believe. But if we make an effort to inform and thus protect ourselves and others, we can push back slowly and steadily against the fakes and the frauds.

The credibility of today’s democracies depends on reinstating the value of truth—something that no number of social-media followers or cybercapabilities should be able to subvert. At the moment, we are experiencing a cultural crisis in which propaganda has a tactical advantage. It is easy to lie; finding the truth requires more effort. But that effort is the only way to defend ourselves from exploitation and our democracies from subversion.

Public legislation, corporate policy, and technology can’t get us through this crisis alone. We, as individuals, need to raise awareness and take action.

Truth is a vaccine against propaganda and political manipulation. A society's overall level of immunity to these threats increases as more people absorb the truth. And like that shot in the arm, the truth can be painful for a second, but the benefits far outweigh the pain.

Real war has come again to remind us that cyberwar, for all its terrors, is not yet on par with the damage done to flesh and family by bombs and bullets.