Tech abuse is a growing problem.

More than one in four women in England and Wales experiences domestic abuse at some point in their lifetime, and two women a week are killed by a current or former partner.

Refuge is a UK-based domestic abuse charity dedicated to combat the growing epidemic of domestic violence. Refuge supports more than 7,000 women and children on any given day, and runs the National Domestic Abuse Helpline, which is the gateway to accessing specialist support across the UK.

Internet connected devices can be used by domestic abusers to abuse and exert control over their victims. Working hand in hand, Avast and Refuge have carried out research to reveal the top 10 IoT devices that are most commonly reported by victims of domestic abuse. Both Avast and Refuge are members of the Coalition Against Stalkerware, and in carrying out this research, we continue to support efforts against digital tracking and abuse.

Here are the most common IoT devices that domestic abuse victims have reported to Refuge:

Further reading:
Eliminating violence against women
What IoT security risks are lurking in my home?
Make sure your in-home IoT is secure

Diving into our teams’ findings

New research of 2,000 women in the UK carried out by Avast and Refuge found that nearly half (48%) couldn’t name a single device they believed could be vulnerable to abuse, increasing to 60% for those over the age of 55. What’s more, 66% of women would not know where to get information to help secure the devices in their home if they felt it had been compromised by an abuser – rising to 79% for those aged 45 and over.

The research also identified other statistics that create a cause for concern. Only 64% of women in the UK have admin control over the IoT devices in their own homes, with 27% stating that admin access over these devices has not been shared equally or with transparency in their household. In addition, 18% of women have no control over the Wi-Fi settings in their home, but their partner or family member does.

Finally, 41% of women in the UK stated that a partner or family member knows the password to their personal connected devices – with only 72% of these women saying that they gave this password willingly.

Ruth Davison, CEO of Refuge, said: “While the findings from this research are deeply concerning, we believe that they are only scratching the surface of a much harsher reality. Many women might not be able to spot the signs that they have been coerced into giving their password to an abusive partner, or unaware that an abusive member of their household is spying on them through their Wi-Fi.”

“The reality is one in four women will experience some form of domestic abuse in their lifetime, and tech abuse is becoming an increasing part of that problem. In today’s society it’s impossible to avoid technology which is why we teamed up with Avast; not only are we trying to raise awareness of the issue, but we want to equip victims, and women in general, to mitigate against the potential dangers of these devices in the wrong hands.”

In response to these insights, Avast and Refuge have joined forces to launch an IoT home safety tool. This interactive tool is designed to help women spot signs that the connected devices in their homes may be controlled by an abuser, as well as providing simple and actionable advice to secure these devices.

The interactive tool, pictured below, replicates a typical home setting, highlighting these devices in their native environment. Clicking on a device will provide viewers with warning signs to spot if the device has been compromised and easy actionable steps to secure the device. 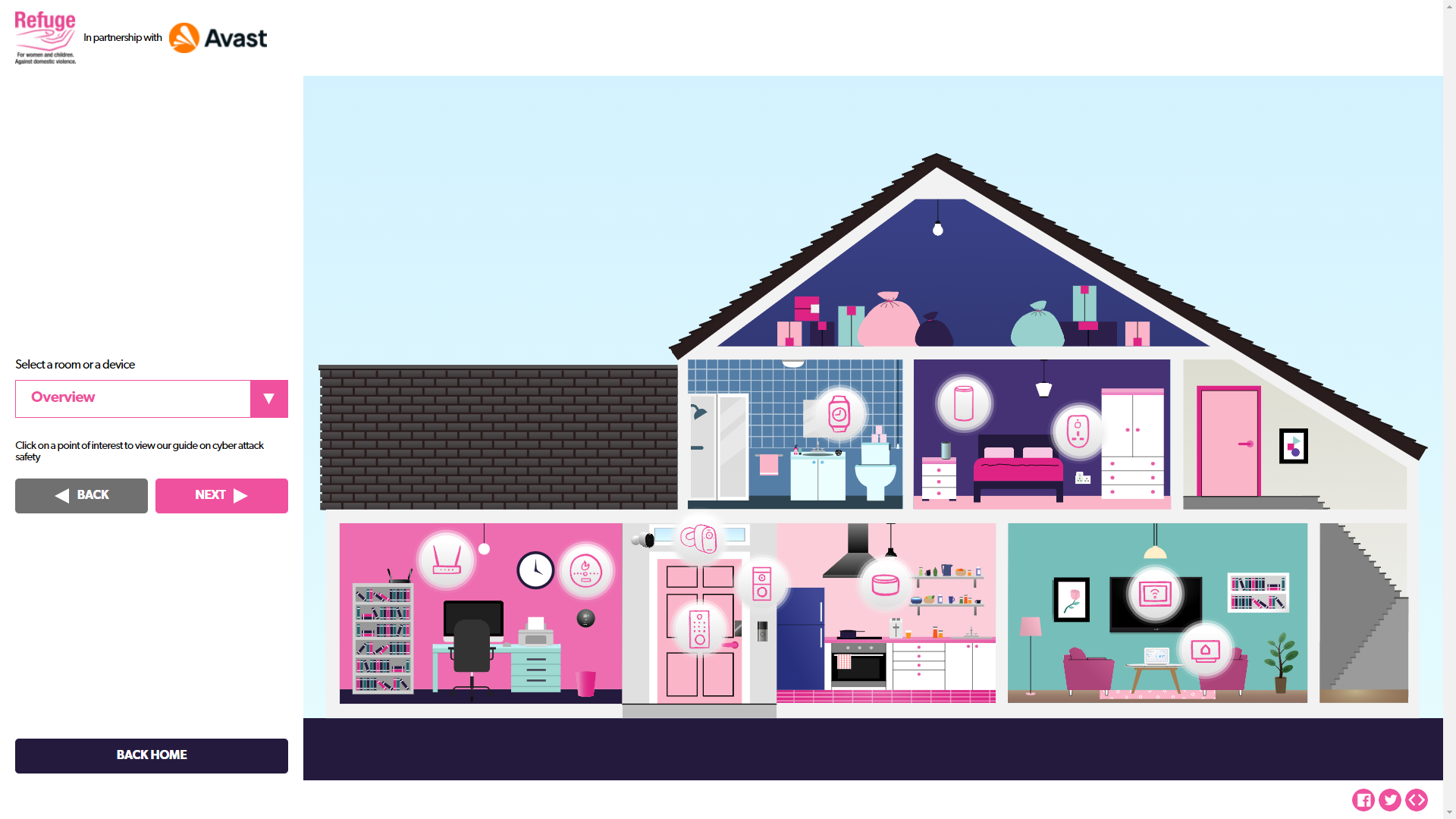 Jaya Baloo, CISO at Avast says: “The ten devices reported to Refuge are all extremely popular and common, so it’s deeply disturbing to know they are being used by perpetrators of domestic abuse.”

“Working with these insights from Refuge, our threat labs team has stress-tested these devices and provided clear and actionable advice for women to help spot the signs of abuse, as well as simple tips to safeguard them and mitigate the risks. These devices are very much a part of everyday life, so as tech abuse becomes a continued threat we want to do all that we can to give women the insights and advice they need to protect themselves.”

Louise, whose name has been changed for privacy, a tech abuse survivor supported by Refuge, said: “My abuser works in tech and had control over our home Wi-Fi. He would tell me I was too stupid to understand it. During lockdown, his abuse escalated, and I needed to take steps to protect myself. I set up some smart home devices to record the abuse.

It never occurred to me that my abusive partner would be able to hack these devices and use them against me; to spy on me, to listen to my calls, to watch me. When I left the house to go out, I’d come back to my things soiled or missing. But when I’d check the logs on my home cameras, the recordings of those times weren’t there.

I couldn’t understand it. I continually doubted myself. My abuser would deny ever having touched anything but would drop hints to let me know he knew the contents of my private conversations. It was terrifying, confusing and traumatic. I didn’t know where to turn for help, but I found Refuge and contacted them for support. They helped me to recognize my experiences as tech abuse and helped me slowly regain control of my devices. Although he no longer lives in my home, I still find it hard to fully relax around my tech. It never leaves the back of my mind that he could still be listening and watching. You’re never free of it.”

A tale of two breaches: Comparing Twilio and Slack’s responses

We recently learned about major security breaches at Twilio and Slack. The manner in which these two organizations responded is instructive.