Avast Blog Phone lost or stolen? Avast has your back with updated Anti-Theft app

Phone lost or stolen? Avast has your back with updated Anti-Theft app

Using Avast Anti-Theft, you can now locate, lock, wipe and sound an alarm on your lost or stolen phones by using any mobile or desktop device.

The Avast Mobile Team recently published an updated version of Avast Anti-Theft. Our app helps you locate and recover your lost or stolen mobile devices and it enables you to locate, lock, wipe and even sound an alarm on your phones by using any mobile or desktop device.

If a phone is lost or stolen, you can simply send an SMS command directly to the phone or download the Avast Anti-Theft app on any other Android device to send a remote command. This command, which can also be sent from the web via your Avast account, grants you full control of Avast Anti-Theft’s wide range of features. 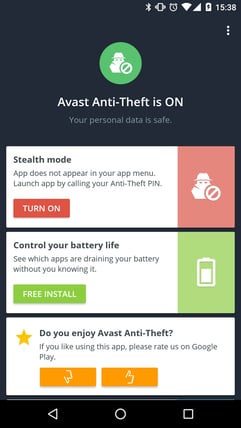 Avast Anti-Theft includes a unique collection of features that are not offered in Android’s Device Manager, such as Sound Recording and a Theftie feature. Both of these features can provide key insights into helping find a lost or stolen device and returning it to its rightful owner.

The app’s Theftie feature gives you the ability to remotely take a photo of the thief trying to steal their device.

Sound Recording allows you to record audio of the thief’s environment to capture potential clues to the culprit’s whereabouts or location. Additional key features of Avast Anti-Theft are as follows:

“We know that millions of smartphones are lost or stolen every year, and with them are large amounts of sensitive, personal data,” said Gagan Singh, president of mobile at Avast.

“With Avast Anti-Theft, users have the ability to not only track the whereabouts of their missing device, but also completely wipe it of all data in the event the device is not recoverable. With the amount of priceless information on our devices, from photos to videos to even banking information, users should have a way to delete the contents if their phones happen to go missing or fall into the wrong hands.”

Additional updates to Avast Anti-Theft include:

Avast Anti-Theft is available for Android operating systems and can be downloaded for free.