Over the weekend, Reddit users reported two apps on Google Play that scam people by posing as cryptocurrency wallets. The fraudulent wallets, “ADA Cardano Crypto Wallet” and “All Crypto Currency Wallet” were both uploaded by a developer called “CryptoWallmart” and were downloaded 100-500 times each.

With the rising popularity of cryptocurrencies, it’s not surprising to see malicious apps posing as crypto wallets entering the Google Play Store. Cybercriminals constantly explore various ways of betraying people whenever they see an opportunity to take advantage of a trend; we have already seen cryptocurrency mining apps imitating popular apps on the Google Play Store. 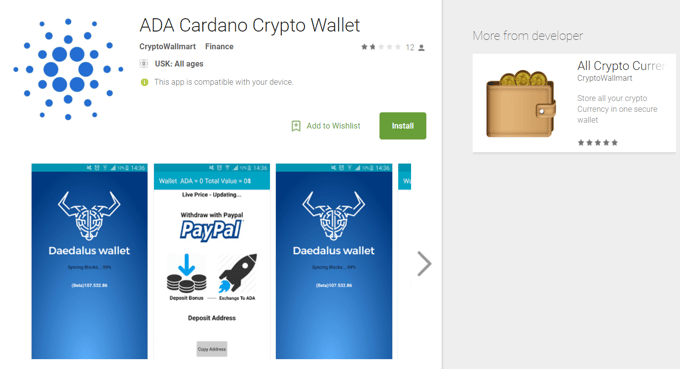 How the scams work

The “All Crypto Currency Wallet” claims to be a multi-coin wallet. The app may sound practical, but instead of being a handy wallet, it steals any cryptocurrency sent to it for safekeeping. The app even includes an added bonus for the app’s developer: an affiliate link from Changelly, a service that helps cryptocurrency owners exchange their coins using the best exchange rate possible. If app users click on the affiliate link and exchange their cryptocurrencies using Changelly, the “CryptoWallmart” developer gets 50% of the revenue from Changelly.

How to protect yourself (and your coins) from fake apps