Attack of the clones: Fighting duplicates with our new Avast Cleanup Pro

File duplicates are a bigger deal than you might think. No worries, Avast Cleanup Pro tracks them down for you.

Let me share something with you: Almost every time I showed off Duplicate Finder to our Mac-using colleagues, they scoffed at me. “I already keep my files neat and tidy,” one of them said. “I don’t need that!”

They certainly didn’t expect what happened after I installed our Cleanup Pro and ran a scan for duplicates.

On everyone’s Mac we found files that, unbeknownst to the user, had been copied, for example:

And that’s just the beginning. In total, this amounted to many gigabytes of “worthless” files.

This is where Avast Cleanup Pro and its Duplicate Finder comes in. From the dashboard, all the user needs to do is hit the SCAN button and then go through the list of duplicates. 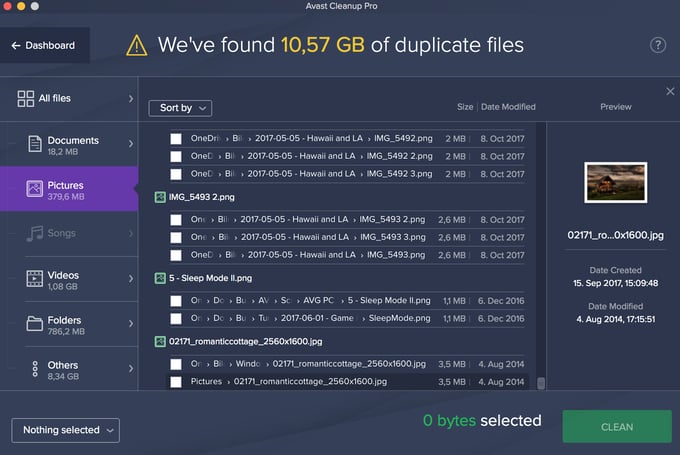 We have divided the finder into different categories (see photo above) like Documents, Folders, and Pictures. The latter one is particularly cool, as the software shows you a preview of the photo so you can see it before you decide which of the copies to keep and which to delete. You basically select the copy (or copies) you don’t need, and hit the CLEAN button.

Sure, it takes a little time to delete all this data, but the reward is an uncluttered hard disk and more disk space.

Think you have duplicates? Get rid of them! You can purchase the product here  https://www.avast.com/cleanup-mac. It requires Mac OS 10.9 (Maverick) or later with at least 68 MB of disk space to run.

Update now to 14.2 to protect your iOS and iPadOS devices from new, previously unknown vulnerabilities.

The tide has turned and Mac users are waking up to the fact that they need protection for their beloved laptops and desktop computers.

Your creativity secured: How Mac users can protect their masterpieces

Find out how Mac users can protect their creative works in a world of increased threats.