Avast Blog Which type of antivirus should you choose?

Which type of antivirus should you choose?

'Free,' 'Premium,' 'Default'? We help you understand the differences and make the right choice.

When it comes to the security of your computer and personal data, you want the best protection available. But all the choices can be confusing. Is free antivirus protection as good as a paid security suite? Is the default program that came with your computer as good as something from another company? Let us explain.

Free antivirus can be exceptionally good. In fact it consistently outperforms paid solutions in third-party tests. That's because the companies that take security seriously can’t afford to put out a product that only goes halfway. And select free antivirus providers, such as Avast, use the same antivirus engine across all core PC security products. Meaning whether you're using our free or premium product, you get the same core malware protection.

In fact, we regularly submit Avast Free Antivirus for testing by independent organizations. In AV-Test’s most recent findings, Avast received a maximum score of 6 in AV-Test’s Product Review and Certification Report. This means that Avast users receive 100 percent protection against zero-day threats and 99.80 percent against malware.

Not all free solutions test this well, however, so it's best to check out these results and judge for yourself.

So what do you get when you pay? Premium versions of antivirus include additional features that free versions don’t have. Premium is for people who want the most comprehensive coverage. With the ways the world is changing, threats constantly emerge, and often a new premium feature addresses those new vulnerabilities.

Examples of our premium features are firewall, anti-spam, data shredder, and Secure DNS, a feature that prevents attackers from re-directing your PC's internet traffic. Many security risks are behavioral, like not changing your password, which weakens your accounts security. Most people choose premium, because it gives them peace of mind that they have the most complete coverage available, from a reputable company.

Default security is the software that comes when you buy your operating system, such as Windows. Windows Defender is one such default product and the most readily available. The downside to default software is that it's provided by companies like Microsoft, who are usually better known for – and have invested most of their resources in – developing other types of software, such as word processing or operating systems. Defender was introduced in 2006, and added antivirus protection added around the launch of Windows 8. But with more than a decade to improve performance, it still consistently performs poorly in third-party tests.

In fact, Windows Defender was the least effective antivirus product from a field of 21 home user security products in AV-Test’s Real-World Testing. Windows Defender only received a score of 89.9 percent on protection against zero-day malware attacks (which is categorised by the AV-TEST Institute as the minimum level of protection), and detected 9 False Positives. The industry average for protection against zero-day attacks was 98 percent.

Another thing to look for is your antivirus program's impact on system performance. You don’t want to use an application that grabs your PC’s microprocessor and slows down your machine. Unfortunately, the default software in Windows 10 significantly affects performance, compared to the free or premium brands of security software. In the chart below you can see that Windows Defender scored 20 points worse than free software like Avast, which scored in the top five. 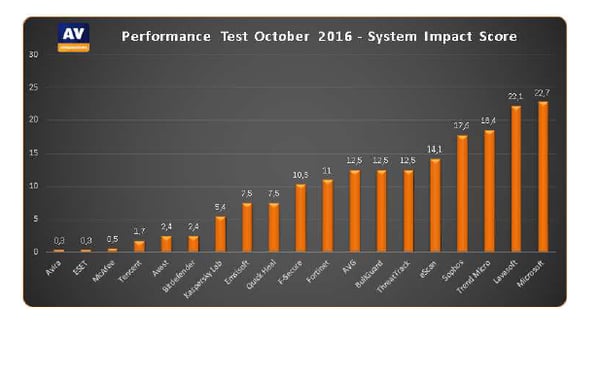 With the launch of Windows 10, Windows Defender is turned on automatically when either an incompatible antivirus program or no antivirus at all is detected. Windows also urges users to uninstall their active antivirus to activate Windows Defender instead. So be wary of the instructions you may be getting from your computer’s operating system on security. You may be setting yourself up for weaker protection. The biggest argument for default is convenience. However, with quick downloads and high-performing free options, you really have a lot of other great choices available.

It is up to you which type of antivirus you want to install on your computer, and the best thing you can do is a bit of research before making a final decision. You should: