Avast Blog The rise and fall of Parler

The rise and fall of Parler

Examining Parler's surge and eventual takedown, as well as what's next for the platform

In the past week, we have seen the takedown of a social network by its largest technology partners. I refer to Parler, of course. The events weren’t entirely a surprise, but their velocity and totality were unusual.

First, Apple and Google removed the Parler apps from the iTunes and Play stores. Then, its hosting partner, Amazon, shut down its servers on Amazon Web Services (although, Amazon preserved its data so the software could be reconstructed at some point in the future).

The history of Parler

Parler is a microblogging site, like Twitter. While it uses different terms, individuals can post short messages and like and respond and re-post messages, mostly using smartphone apps. It called itself as the world’s “premier free speech social network” and became the darling of the right-wing political class in the US.

Over the past year, its popularity has grown, thanks to having many conservative media stars including Sean Hannity, Lou Dobbs, Mark Levin and Maria Bartiromo join the network and promote their use of it on their TV shows and podcasts. Listeners were also encouraged to join so that they would get the uncensored content without any filters. And join up they did: until the takedowns, there were about 15 million Parler users, a number that had doubled since before the November elections.

Parler CEO John Matze told the New York Times that the company would probably shut down "for up to a week as we rebuild from scratch". He is currently casting about for a new hosting provider. One potential home could be Epik, which hosts Gab, another far-right platform who had its own takedown in 2018 after it hosted posts from the Pittsburgh synagogue shooter. 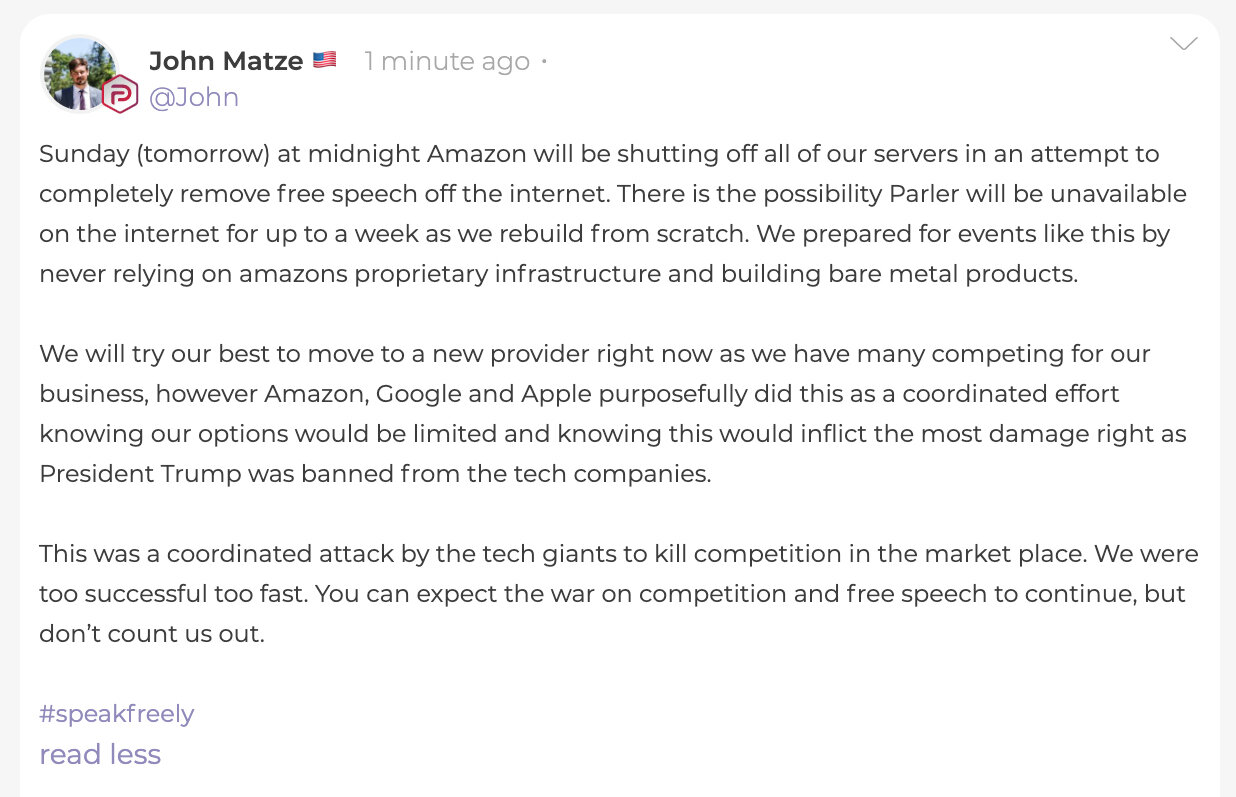 This illustrates an important point: on the internet, content can have many lives. Gab was down for about a week in 2018. Hatreon, a crowdfunding site that was developed to support abhorrent causes, never recovered in 2017 after Visa dropped its support for processing payments.

It might take Parler longer to find and resurrect its service because of the smartphone app ban, and retooling its servers isn’t a simple matter, according to this Twitter thread from Corey Quinn. And as Dave Troy writes, it may be impossible to find anyone to host it because the company has become so toxic. (Troy has also suggested that Russian state funding sources are behind the service.)

Is this a freedom of speech issue?

The migration from Twitter and Facebook by this audience was fed by their frustration at being censored. The claim that conservative voices were systematically silenced is a complex situation. I wrote last month about this topic, showing that the major social media networks aren’t consistent in how they apply their fact-checking policies across the political spectrum. When you examine the last Trump posts on both networks, it isn’t obvious what specific violations are relevant: certainly, there were numerous previous posts that were inflammatory and more vile. Twitter, Facebook and other networks removed President Trump’s various social media accounts, claiming violations of their terms of service. The complete timeline of the various networks is chronicled here.

If you examine Kevin Roose’s Top 10 list of Facebook posts, you can see that before the election these lists were dominated almost completely by right-wing sources. More recently, the top 10 lists have been more evenly split right/left, but still there are days where only a couple of the top 10 are from moderate or left-leaning outlets.

Also, if you want to read a really good examination of freedom of speech issues, I recommend reading security analyst Daniel Miessler’s “The Line Between Choosing Your Own Customers and Censorship” post.

It is all about misinformation

Part of the problem here is that the deleted or tagged posts contained misinformation that was amplified by the networks. It didn’t help that this misinformation was being generated from Trump’s own fingers. While Trump has always had trouble with facts from his first days in office, the departure from the truth (and the number of warning labels applied by Twitter and Facebook) widened with his insisting that he won the 2020 election and that millions of fraudulent votes – which, oddly, have all been cast for Biden– shouldn’t be counted. (Neither of these statements have any shred of truth. Various investigations have found a few fraudulent ballots, and by a few, I mean in the single digits. Some of these were from Trump voters.)

Here is one final example of misinformation. While the riots were being televised, a series of TV hosts began making the claim that the rioters weren’t just pro-Trump supporters but had Antifa and left-wing participants. Jimmy Kimmel compiled clips showing this, including speeches from the floors of the Congress just after the occupiers left the building Wednesday night. The FBI has said there is “no indication at this time” that Antifa had played any role in the mob that stormed the Capitol.

Let’s first look at the legal options. Parler’s takedown was hastened by the aftermath of last week's occupation of the US Capitol. Some Republican politicians were quick to claim violations of freedom of speech laws. That is somewhat ironic and false, as these laws only concern government takedowns: all of the tech companies are private businesses. Whether it is proper is another story, and the American Civil Liberties Union lodged a complaint. So did Congressman Devin Nunes of California, who claims a variety of laws (including antitrust and civil rights) that could be violated as a result of the Parler takedown. And then there is the much-mentioned Section 230 of the Communications Decency Act of 1996, which removes or refines the threat of lawsuits for social media companies. Clearly, there will be hearings around the world to debate these and other options.

In the meantime, let’s follow the money, or the lack of money. Payment processor Stripe has stopped processing payments for Trump’s campaign websites. Marriott, Citigroup and several other major businesses have also announced a pause in campaign contributions from their political action committees. These could have a lasting effect, or just a blip on the social media coffers, like the Facebook ad boycott from last summer.

Finally, Italian tech journalist Marco Fioretti has proposed that each social network user be allowed two daily minutes to post hate-filled remarks. He got his idea from George Orwell. This might be the best suggestion yet.