In January, Avast protected users from sextortion campaigns which could have resulted in over 500,000 incidents worldwide

Sextortion is an emerging online scam that takes advantage of people’s fear that their most intimate moments will be exposed to the public. They usually come in the form of emails, which are not only dangerous and unsettling but can have serious real-world consequences.

Tragically, sextortion email scams have even led victims to suicide, including a case involving five separate men in the UK and one in the United States. These are just a few of these types of cases.

In January, Avast protected users from various sextortion campaigns which could have resulted in more than 500,000 incidents worldwide. Most of these attacks targeted English-speaking users in the United Kingdom and the United States, though we detected campaigns in other languages as well. The image below shows the prevalence of sextortion attacks worldwide: 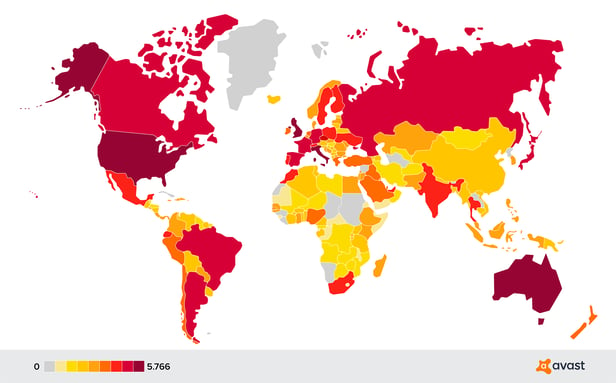 How does sextortion work?

Sextortion relies on people’s willingness to pay money in order to keep damaging secrets quiet. In a potential victim’s view, this kind of attack is a sudden threat to his or her reputation. A potential victim can think of the consequences in the Jeffrey Toobin case, for example, and see the risk of private moments being exposed to the public. The attackers prey on this fear and apply other social engineering techniques — such as limiting the time period for paying — to create an illusion that the user’s machine is hacked. They might also provide a list of activities that an attacker will take to harm the victim. 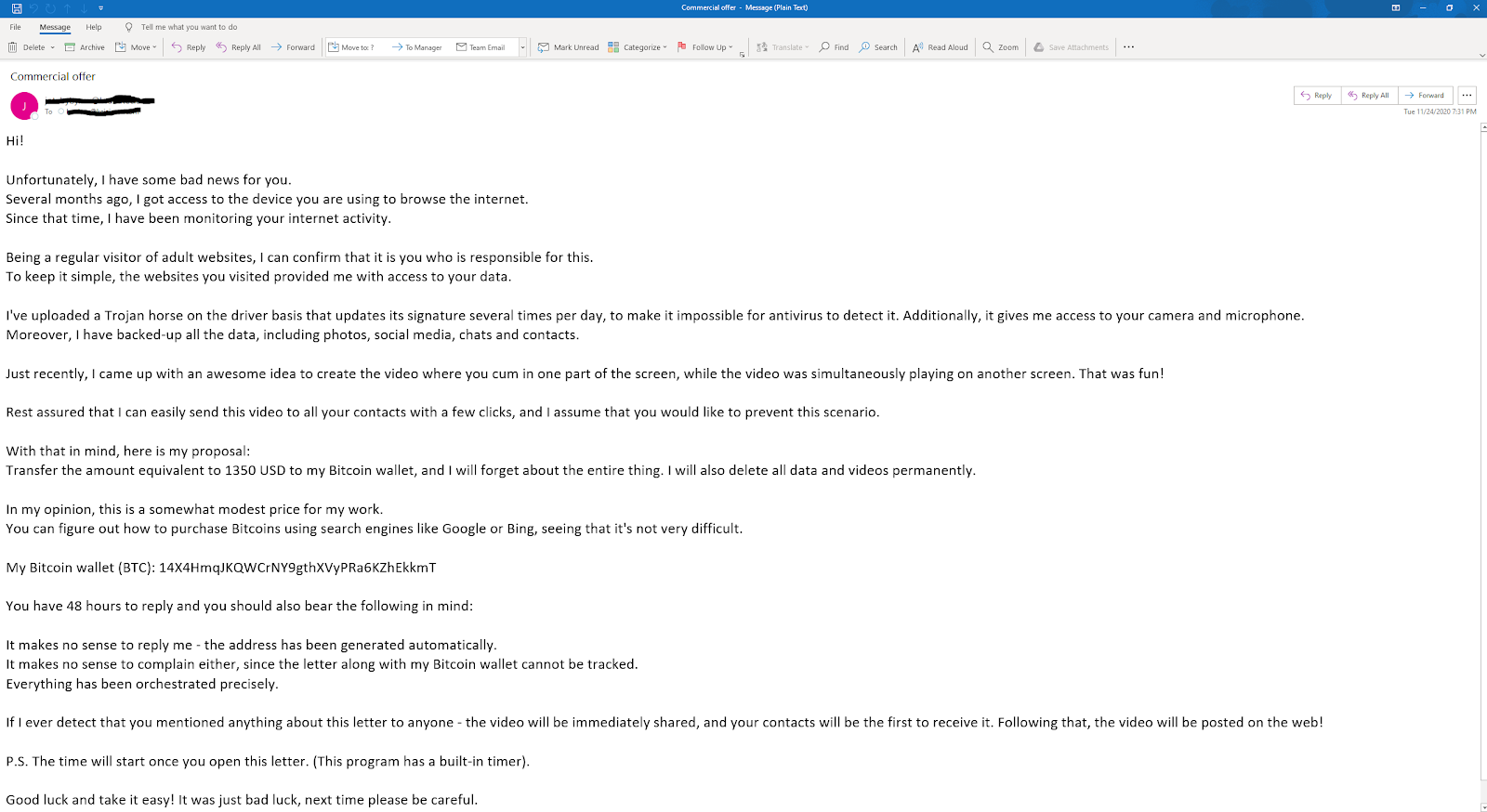 An important thing to note is that there’s no way to be sure that the attacker’s claims are true. In fact, very often the attackers behind these threats are bluffing and there is no actual video.

This is a generic example of sextortion emails. But attackers commonly prepare spam campaigns with regard to current trends and events.

The most prevalent campaign we observed took advantage of increased use of Zoom during the Covid-19 pandemic. In particular, we saw an uptick during the 2020 holiday season. Attackers claim that they’ve taken advantage of critical vulnerabilities in the Zoom application, allowing them access to a user’s device and camera. But, to be clear, we haven’t found any actual vulnerabilities in Zoom — the attackers are lying.

Attackers use social engineering techniques and mention Jeffrey Toobin’s scandal to get victims to pay up. The rest of the email is a typical extortion email, where attackers use phrases such as “the recorded sexual act”, “access to sensitive information”,  and “terrible reputation damage” and offer up payment as a way out.

A distinctive feature of this type of campaign is that emails look like they are sent from the user's email address to themselves. This is another social engineering technique, aiming to make it look like the attacker really does have control of their system. In reality, the “from” address has been tampered with and closer analysis reveals the real address of the sender. 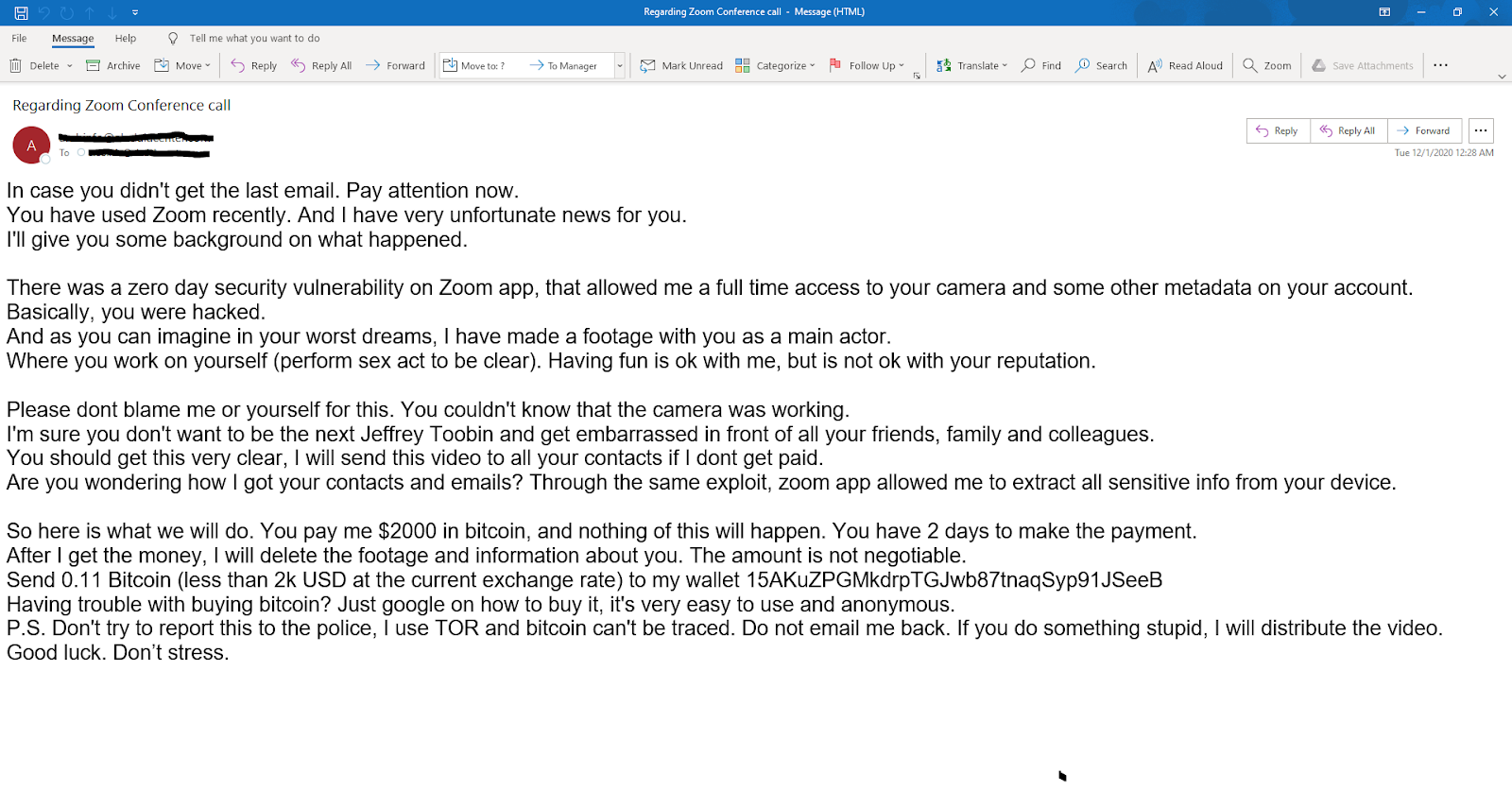 The second prevalent campaign utilizes the threat of Trojan malware. The potential victim receives an email in which the attackers claim a Trojan was installed on their machine a few months previous. The attackers also claim that this “Trojan” recorded all of the potential victim’s actions with a microphone and webcam and exfiltrated all data from the devices, including chats, social media, and contacts. They then use a common extortion scenario: attackers demand a ransom in cryptocurrencies. In the end, attackers include a note about the fake “timer” that started when the email was received, in order to set a ransom deadline.

Just like Zoom campaigns, these threats are all fake. There are no undetectable Trojans, nothing is recorded and attackers do not have your data. The timer included in the email is another social engineering technique used to pressure victims into paying.

Below is a sample email from a Trojan campaign (in Spanish). 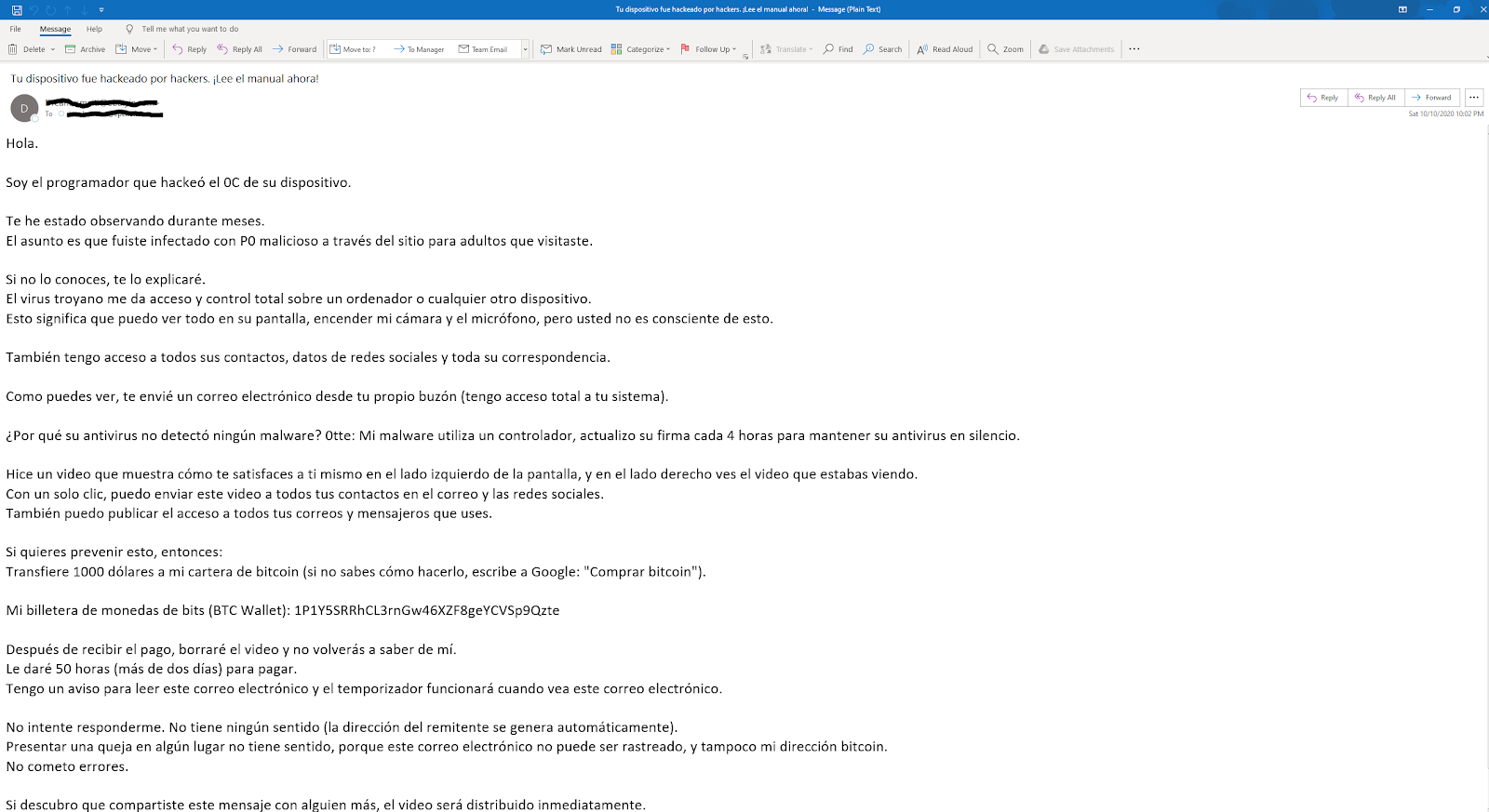 Another sample email from a Trojan campaign (in English). 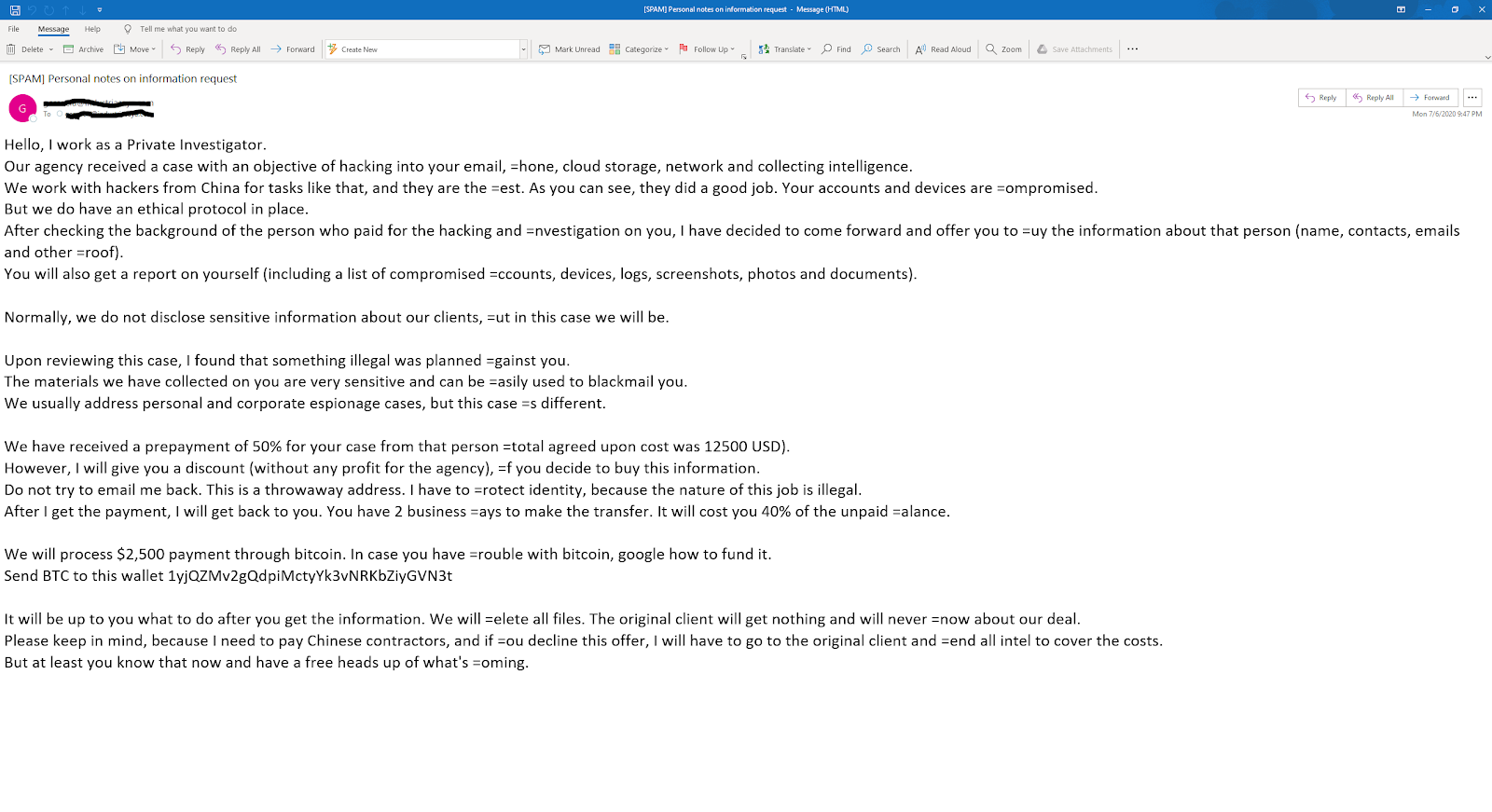 Other scams and the rise of new post-holiday variants

We’ve observed many other sextortion scams in addition to Zoom and Trojan campaigns. Some of them are originally in different languages and the content is automatically translated using a tool like Google Translate.

We’ve also seen a significant rise in the volume of sextortion emails sent since January 11 — it seems that attackers are getting back to work after the holidays. We’ve seen sextortion attacks mentioning hacked programs, software, website, or utilizing vulnerabilities in a victim’s router, OS, or RDP.

How to protect yourself from sextortion

While sextortion is scary, there are simple steps you can take to better protect yourself against this type of attack.

First, if a “sextortion” email appears in your inbox, stay calm. Do not answer it and do not pay money to the attacker. Nobody will actually blackmail you; it’s just spam. Even if you get an email that looks like it was sent from your own account, ignore it.

Next, attackers may provide older leaked passwords to boost the credibility of their threat. If that’s the case, change your passwords and follow password best practices.

Finally, make use of security products that can protect against sextortion.