Reddit AMA with Garry Kasparov: How does AI affect our digital lives?

Garry Kasparov, former world chess champion, tech optimist, Avast Security Ambassador and an advocate both of AI and digital human rights, will soon be hosting a “Ask Me Anything” (AMA) session on Reddit. In addition to answering questions raised by Redditors, Garry’s AMA will address two big questions:

Garry is passionate about discussing AI and future tech at events and conferences, and he’ll be hosting this AMA session in partnership with Viva Technology, Europe's biggest startup and tech event happening June 16-19 both in Paris and online. As a former speaker at VivaTech, the topics raised during Garry’s AMA will tie in nicely with many of the talks at the upcoming event.

What to expect during the AMA

New to Reddit AMAs and curious what they’re about? In a nutshell, r/IAmA is a subreddit that’s home to a wealth of diverse, interactive interviews with some of the brightest and most influential minds from across the globe (including Bill Gates and former President Barack Obama, just to name a couple). 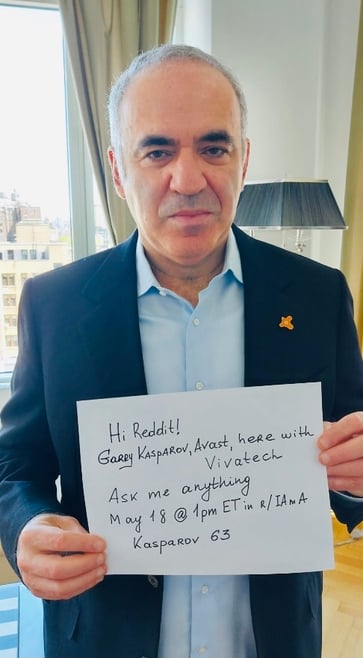 Garry’s upcoming session will be taking place on Tuesday, May 18th at 1PM Eastern Time (EST). The link will be available directly on r/IAmA, as well as Garry’s own Reddit account (we’ll be sharing it on our social channels as well).

Avast One’s Online Safety Score and Network Inspector features strengthen digital protection capabilities on Mac and iOS for people at home and on the go.

The Indian government announced new legislation which requires VPN operators to store user data for a period of five years. Avast continues to protect its users’ privacy both in India and around the world.