If you couldn't wrap your head around the latest episode, eps2.1_k3rnel-pan1c.ksd, of Mr. Robot, don't panic -- Avast explains the technical terms.

As the name of the episode suggests, there was a lot of panic in this week’s episode of Mr. Robot. The remaining members of fsociety are panicking after both Gideon and Romero were murdered. Elliot is, as usual, freaking out about Mr. Robot, which causes him to find a new addiction, adderall. Angela receives evidence that could be used to prosecute some of the men who could have prevented her mother’s and Elliot’s father’s deaths - something she wanted all last season, but now that she has it, she is unsure of what she should do. She tells Mr. Price she doesn’t trust him, who can blame her? Ray, Elliot’s new “friend”, seems to also be a bit panicked about the status of whatever business he is running. Even FBI agent, Dominique DiPierro, appears to be a bit panicked when she finds a list with her name on it at Romero’s murder scene.

While there wasn’t much hacking in this episode, there was quite a bit of computer talk throughout the episode. 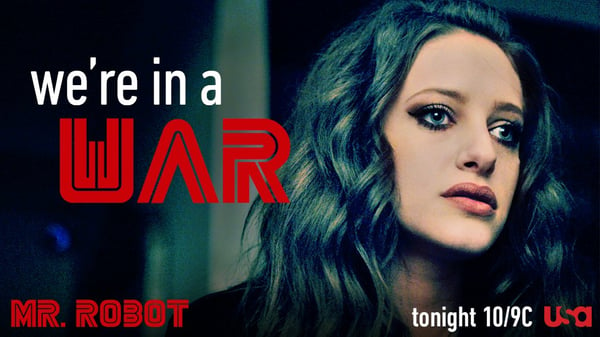 In the first scene of the episode, we learn where fsociety got its name from, how Romero became involved with fsociety, and why fsociety is headquartered in an old arcade on Coney Island and that the arcade is very cursed.

Stefanie: In this flashback scene, Mobley tries to convince Romero to work for them. He says they need a phreaker and that Romero is the best in the game. What is a phreaker?

Jaromir Horejsi, senior malware analyst: A phreaker is someone who basically hacks telephone systems. I am talking about landlines, phreaks were mainly active in the 1960s and 1970s. I am guessing Romero wiretapped phones and was put away for it. You can find more interesting information about phone phreaks here.

Forensics is at the scene of Romero’s murder, as is Dominique from the FBI. While the detective shows her the list of names of FBI agents they found in Romero’s possession, she sees a forensic expert plugging in Romero’s computer and asks if they checked the ports. The computer catches fire as soon as it is plugged in.

Stefanie: Why did he set up his computer like this?

Jaromir: So the police and FBI couldn’t access his files! This isn’t that uncommon, hackers can be very careful and most of them understand the importance of data security.

Stefanie: How can people like me wipe sensitive data from their PCs and mobile devices before selling them or passing them along?

Jaromir: The answer is simple: use Avast:). For PCs, you can use Avast Premier, which includes a feature called Data Shredder. For Android devices, I would recommend Avast Anti-Theft’s thorough wipe feature. When you simply delete a file, either on your PC or Android device, you are only deleting the reference to the file. In order to really make sure your data is deleted, both the file and he reference need to be deleted. Both Avast Anti-Theft and Avast Premier’s Data Shredder feature do this by finding the sector’s that belong to the file and overwriting them several times with random patterns.

In this episode we learned a bit more about Ray and about the type of online business he is running. Ray’s business partner roughed up their IT man and Ray has a little chat with him. He tells Ray that as soon as he gets the site back up, the Bitcoin wallets are emptied and the server keeps crashing. He says that he does not have enough experience to migrate the system to a more secure location that is set up with a system of hot and cold wallets.

Stefanie: What are hot and cold wallets and why should the site be migrated to such a system?

Jaromir: A hot wallet is a Bitcoin wallet that is connected to the Internet and is available online. This is probably the type of wallet Ray’s site is currently using, which is why hackers keep emptying it. A cold wallet, on the other hand, is a Bitcoin wallet that is kept offline, not connected to the Internet. The wallet is stored on a USB stick, that is not plugged into a computer, for example. I completely agree with Ray’s poor IT guy. If you have large amounts of money, you should keep most of it offline and just put a little bit of money into your hot wallet, which you use for paying. If your hot wallet is hacked, it doesn’t hurt you that much, because most of your Bitcoins are saved in your cold wallet. It’s like in the real world, where you have most of your money saved in a bank and only keep a small amount of cash in your wallet. If your wallet is stolen, you only lose a little bit of money.

Day number five without sleep for Elliot, he is crashing. He mentions kernel panic, as if it is a mode he is in now.

Stefanie: What is kernel panic?

Jaromir: Kernel panic is for Linux and Mac systems what the blue screen of death is for Windows. It is an error where the operating system cannot continue to run. The system stops and displays the kernel panic message.

Stefanie: Interesting, thank you Jaromir for taking the time to answer my questions about this week’s episode!

I personally think Mr. Robot was the one going into kernel panic. Elliot tried his best, with the help of lots of adderall to keep Mr. Robot out of his mind, shutting him down and preventing him from operating.

Let’s see if we finally find out where Tyrell has been hiding all this time, if Dominque will get closer to catching fsociety and if Elliot will begin working with Ray in the next episode.

What did you think of the episode? Let me know in the comment section below!