Facebook to help you find free public Wi-Fi. But is it secure? 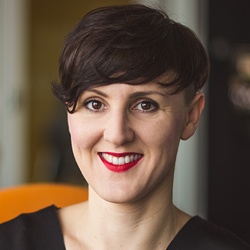 Facebook is doing limited tests on a new feature to help you find free and public Wi-Fi hotspots.

Facebook, the social giant that many people check obsessively, is testing a handy new feature to help their users find free public Wi-Fi directly via their Facebook mobile app. The tested feature is available only for selected iOS users in various countries. "To help people stay connected to the friends and experiences they care about, we are rolling out a new feature that surfaces open Wi-Fi networks associated with nearby places," a Facebook spokesperson told Mashable. 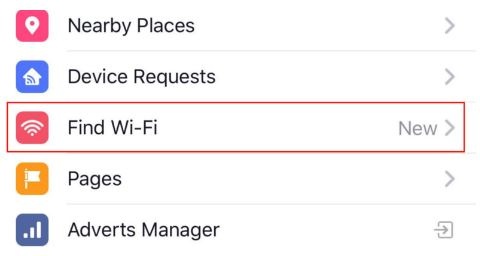 We believe that being connected gives us flexibility and great opportunities, but before you actually connect to any public Wi-Fi recommended by Facebook, double-check its security and speed. You can do it for free, using Avast Wi-Fi Finder.

How does Facebook’s Find Wi-Fi work?

Once you click on the Find Wi-Fi feature, you will see an actual map with a Wi-Fi spots, showing you the distance and directions towards the public free Wi-Fi hotspots available in your area. 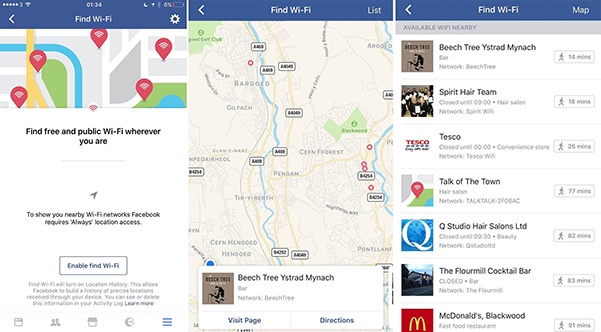 At this point there is little information available about the Find Wi-Fi feature, and much speculation about why Facebook is even releasing it. One of the most prominent is that is supports the company's mission to help people access the internet (even if it's through its platform). Other theories involve collecting information about business and its users. "And then there’s the whole targeted advertising thing," comments Ken Yeung. "Getting you to free hotspots around the city could impact the ads that you’re shown within your Facebook experience, selling you on hanging out at more popular local merchants and restaurants. We don’t want to speculate, we just follow the available facts. One of our tasks as a security company is to raise questions about safety and privacy of users’ data, and Facebook will be using this feature to collect user data for advertising purposes.

Find Wi-Fi will show you not only show businesses offering free Wi-Fi, but also how long it’ll take to get there and the network you can connect to. Facebook recommends that you give the app permission to access your location history, claiming it will “allow Facebook to build a history of precise locations received through your device.”

While many people love Wi-Fi hotspots because they grant access the internet when they travel to new places, risking losing personal data isn't worth it. "Many of us have found ourselves in situations when traveling or working remotely in which we’re unable to find reliable and secure Wi-Fi," said Gagan Singh, president of mobile at Avast. "With the Avast Wi-Fi Finder, consumers are now able to find a safe and fast Wi-Fi connection whether they're at the gym, hotel, airport, bus station, library, or café.”

Our technology checks for Wi-Fi hotspot vulnerabilities by:

For maximum data protection, use VPN

In February 2016, we ran an experiment at the Barcelona Airport and gathered more than 8 million data packets, proving that open Wi-Fi hotspots are risky. We learned that:

“Many individuals recognize that surfing over open Wi-Fi isn’t secure," added Singh. "However, some of these same people aren’t aware that their device might automatically connect to a Wi-Fi network unless they adjust their settings."

To make sure that your connection is secure regardless of your Wi-Fi hotspot settings and avoid looking extensively for recommended, secure hotspots, we recommend that you use a VPN service. You can download a free VPN trial from Avast.

Online safety for our children is as easy as ABC – Avast Blocks Cybercrime! Learn how we stop the crooks, so your child can hit the books.

A day in the life of your smartphone... tracking you

Learn how your smartphone tracks your steps through an average day, and how you can protect your data.