In reality – while there are challenges – AI also presents many opportunities for cybersecurity, Avast Chief Executive Officer Ondrej Vlcek and Avast Security Ambassador Garry Kasparov said in a keynote address at the Digital Transformation Expo in London on Thursday. 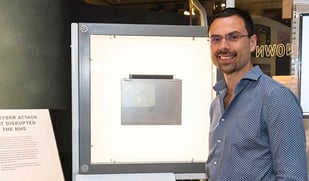 “For cybersecurity AI today is super important” Vlcek (pictured) said at the conference. "We see AI as a great tool to help cybersecurity provide better defense and better protection against attacks."

For emerging IoT technologies and the AI behind them to work, they need to be fed with big data, and that can put people’s security and privacy at risk. In the United Kingdom, Avast recently scanned over 400,000 home networks and found 28% of IoT devices there are vulnerable to attacks.

But emerging technologies also bring new opportunities for security. Avast has a network of hundreds of millions of sensors that feed the company's AI with data to detect threats quicker and protect users better.

The IoT and AI industries are evolving, Vlcek said, and cybersecurity can begin to organize devices and vulnerabilities better. "There's a huge change in the industry, and a huge new underpinning for cyberattacks. Many of these devices we see today are sort of broken as they enter the market when it comes to security."

Consumer awareness and protection are vital, Vlcek said. "Low awareness of the problem is a problem, as well. At Avast, we believe people should have more control personally over their data and how it is manipulated."

Kasparov said at the conference that we should stop discussing artificial intelligence in "Biblical terms." AI "is not salvation or damnation," he said. It's a tool people can use to make the world better.

After the keynote, Kasparov was joined by Galina Alperovich, senior machine learning researcher at Avast, for a panel on AI ethics in business.

The Digital Transformation EXPO Europe conference, now in its 15th year, features 300  speakers, 260 exhibitors, and attendees from the IT, cybersecurity and Big Data industries.

In the latest “Modern CTO” podcast episode, former CTO of Alteryx Derek Knudsen talks with Avast CTO Michal Pechoucek about the role of AI in cybersecurity, the way to decrease the cost of online freedom for all, and why it’s important to keep users invested in their cybersecurity health.

Beyond protection: How Avast is enabling and empowering every digital citizen

Today, we unveil not only our new brand identity and new product offering, but we also renew our commitment to the purpose that has always driven our business: protecting the safety and privacy of people online.